I created the 3D room that was used in this published psychology study while also acting as an assistant during the trails.

The study can be read here, and the abstract is below.

Published online: 15 May 2019 # Springer Nature B.V. 2019 Abstract Women are less likely to choose physical Science, Technology, Engineering, and Math (pSTEM) majors, partly because a lack of role models makes it hard for women to imagine themselves as successful in those fields. Possible self-interventions can help people imagine themselves having a successful future. Using social cognitive theory and expectancy-value framework, the current study explored virtual reality (VR; HTC Vive) as a space for a possible self-intervention to decrease stereotype threat and increase pSTEM motivation. Participants were 79 undergraduate women in California (46% Asian, 32% Latina, 14% white) who were randomly assigned to embody a future self either highly successful in pSTEM or highly successful in humanities. Following the virtual experience, women in the pSTEM condition differed significantly from women in the humanities condition regarding pSTEM value beliefs, anticipated stereotype threat, course motivation, and women-pSTEM implicit associations, after controlling for prior pSTEM-self implicit associations. However, this difference only occurred among women who identified with the experience. While women with high identification demonstrated an effect in the desired direction, women with low identification demonstrated reactance in the opposite direction. This speaks to the usefulness of identification as a moderator and implies that virtual reality might be a useful tool for future self-interventions among students. Keywords Social identity . Possible selves . Expectancy-value beliefs . Identification . Virtual reality intervention . STEM confidence 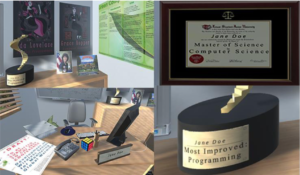